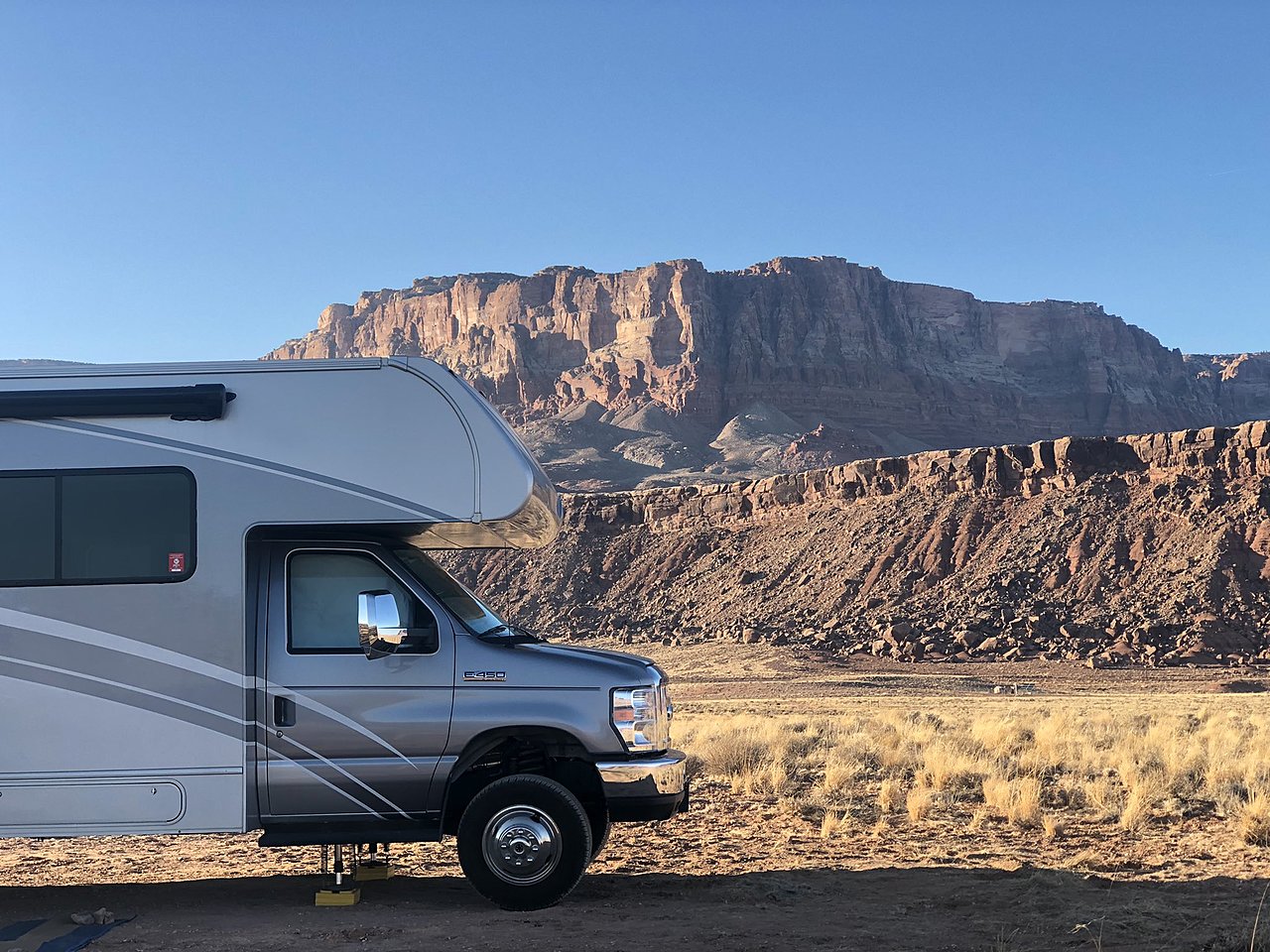 We finished what we could in Sedona, AZ, and headed toward Page, AZ. Nick found a boondocking spot in Marble Canyon off of 89A just outside Vermillion Cliffs National Monument. The entrance to the road was a little sketchy - but doable from the right angle! The road itself was rough. The road splits - left takes you closer to the canyon, right takes you a little farther away from the edge! The road leading toward the canyon was rocky - like "mess up your tire if you're not in the right set up" rocky! But dang, the views! And you can camp right along the canyon if you're brave enough! We took the road to the right, which still had some rocky sections but most of it could be maneuvered around. The views of Vermillion Cliffs from our spot were amazing - and watching the cliffs light up with the sunrise, whew! Beautiful! But the wind! Holy smokes. We had to bring our slides in a few times and overnight a couple of nights because we were afraid of the slide toppers getting ripped.

Being right on the edge of the Navajo Nation meant that a lot of the "attractions" were closed. Antelope Canyon and The Wave were two that we had hoped to tour but that wasn't possible this trip. We still found plenty to keep us busy.

Down the road from our camp was the Historic Navajo Bridge. Completed in 1929, it made travel between Arizona and Utah a whole lot easier! A ferry was used starting in the 1870s to cross the Colorado River. And if you didn't want to take the ferry, it was an 800 mile trip around the canyon to the other side! The original bridge eventually became too small and too weak for modern vehicles so they built a new bridge right next to the first one. The original bridge is open to pedestrians. It offers an amazing view of the Colorado River about 400 feet below you! You'll see the occasional boat or raft float under the bridges. 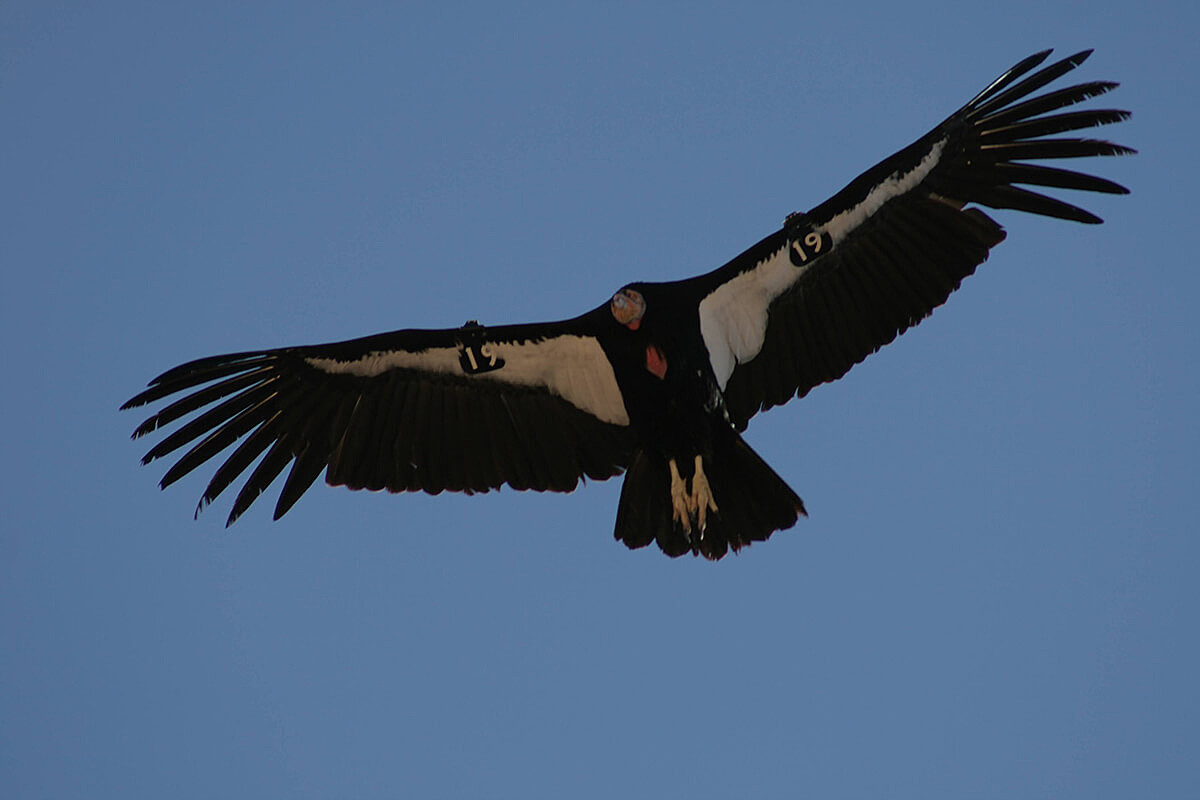 One other thing we were able to see at the bridge were California Condors! Our oldest son, Max, is a bit of a bird geek and these California Condors were on his "must-see" list for a while. They are considered critically endangered with only 500+ in the wild (up from 20-something, in captivity, in the 80s). We figured it would be pretty unlikely to ever actually see one in person. But we must have been in this area at just the right time because we saw as many as seven around the bridge one morning. We went back that afternoon and saw that a few of them were still there. And the next morning, there were five sitting along the cliff between the two bridges. Close enough for Max to read their tags through his camera. (they are each tagged and monitored - and their history can be looked up on condorspotter.com - their age, their parents, where they've been spotted...) 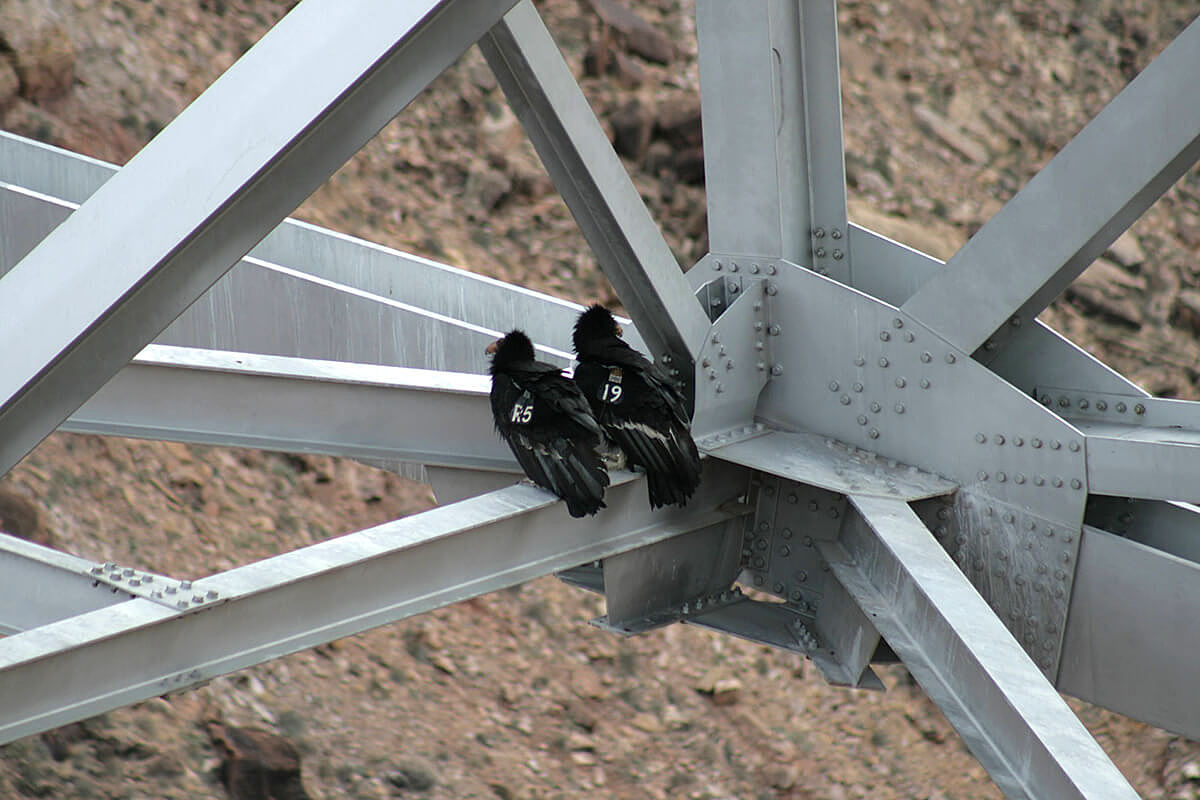 From what we heard, winter and spring are great times to see them at this location. We read late morning was a better time of day but we saw them a few different times throughout the day. We went on a really windy day and they all seemed to stay in the air or on a cliff too far away to see. But on a less windy, sunny day, they seemed to like to be on the bridge trusses soaking up the good weather!

Inside of Vermillion Cliffs National Monument, there is a condor viewing area. There are signs teaching about condors and what they're doing to protect them. From the picnic table, you can see white marks on the cliffs - where the condors spend a lot of their time and make a big, um, mess! But it's so far away it would be hard to really see them - even with the built-in binoculars there. Even having a 9+ foot wingspan, they're just too far away.

About a minute down from the Historic Navajo Bridge is Lee's Ferry (remember the ferry people had to use before the bridge? This is the place!) There is a short trail you can take along the Colorado River with informational signs and old buildings along the way. It was a neat stop to get some more history of the area. 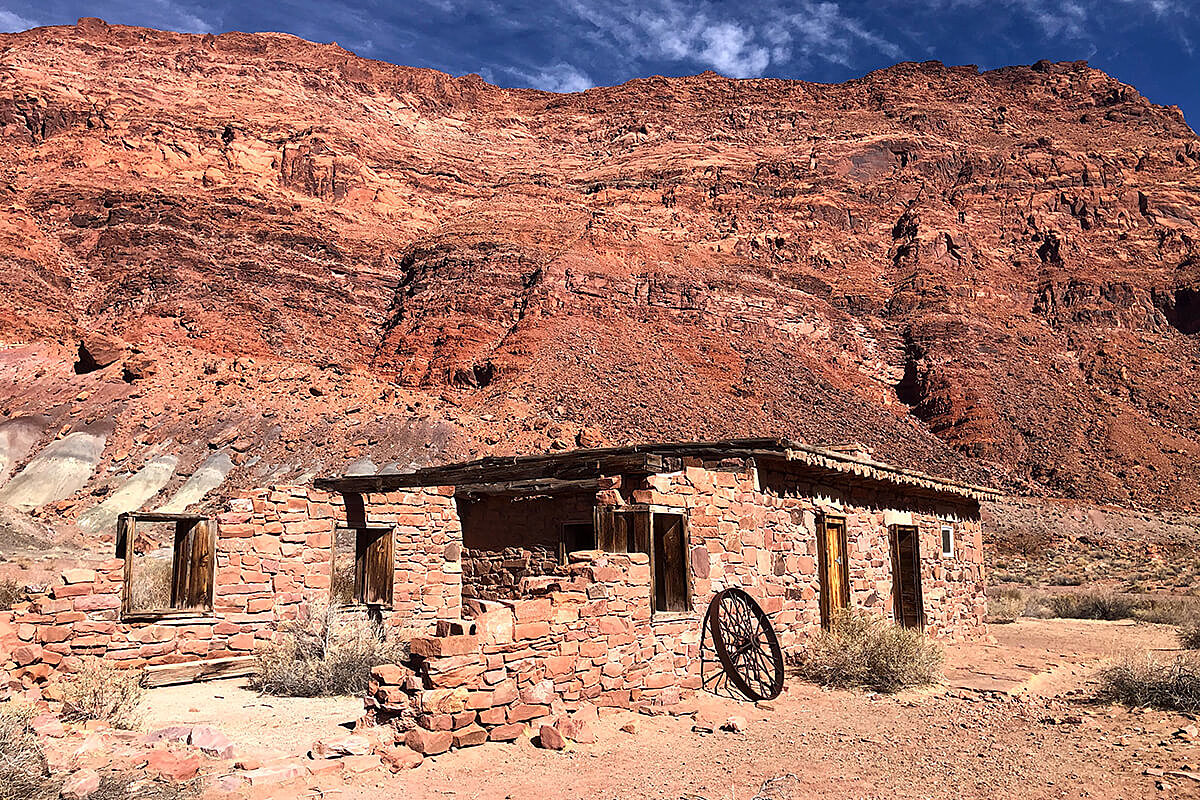 Of course we had to check out Horseshoe Bend while we were here! Unfortunately for us, the day we went was super windy! We spent most of our time getting pelted in the face with sand and small rocks! But what we did see was really cool. There is a viewing area that has a barricade at the edge so you can get close to the edge without worrying as much. But you can keep walking away from that area and the protective barrier stops and you can get as close to the edge as your little heart desires! The wind made us more cautious than usual and we kept a good distance between us and the drop-off! 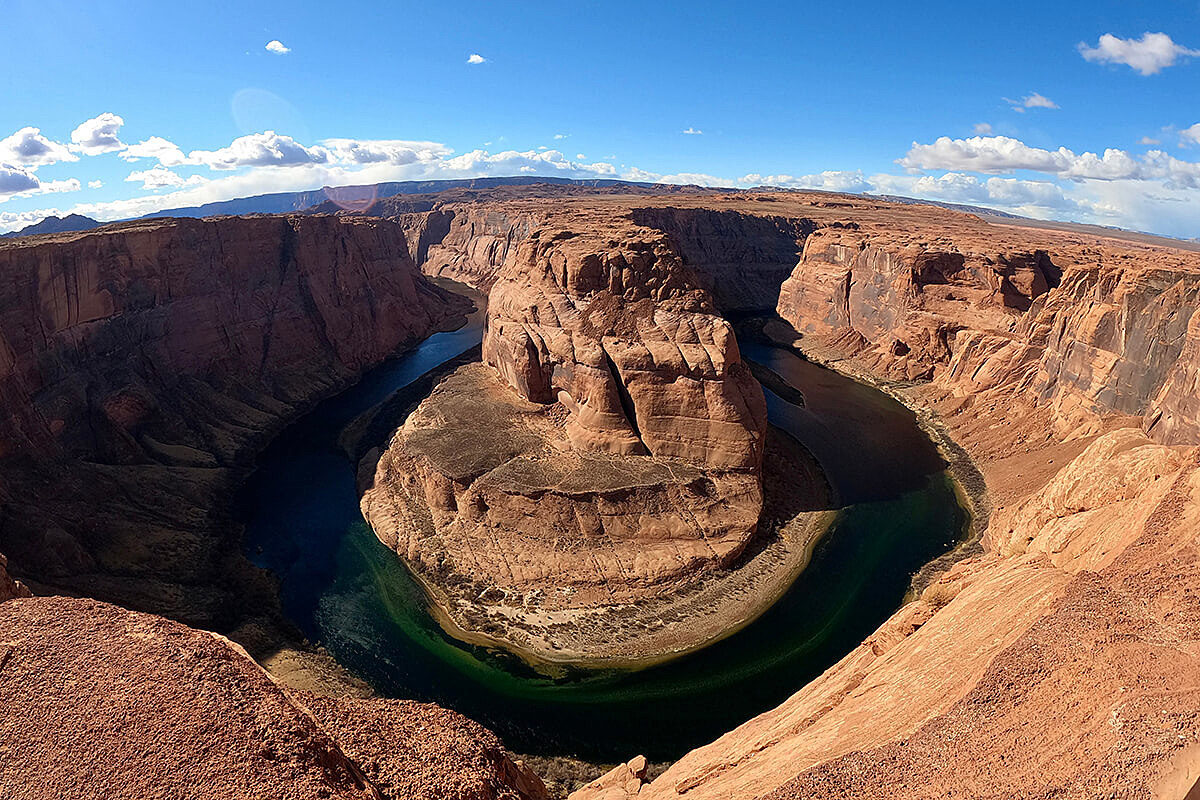 In doing research for this area, I came across a post about a place called the New Wave. Kind of like The Wave but less busy and ya know, open! So we decided to check it out. The road getting there turns to sand so we parked before the sand and headed straight up to our left. Well, that's what we would have done if we knew where we were going! So actually, we parked, wandered back and forth along the rocks for a few minutes before we caught sight of the trail which is two rows of rocks that mark the trail! It was pretty neat and worth the drive into Page to see it. 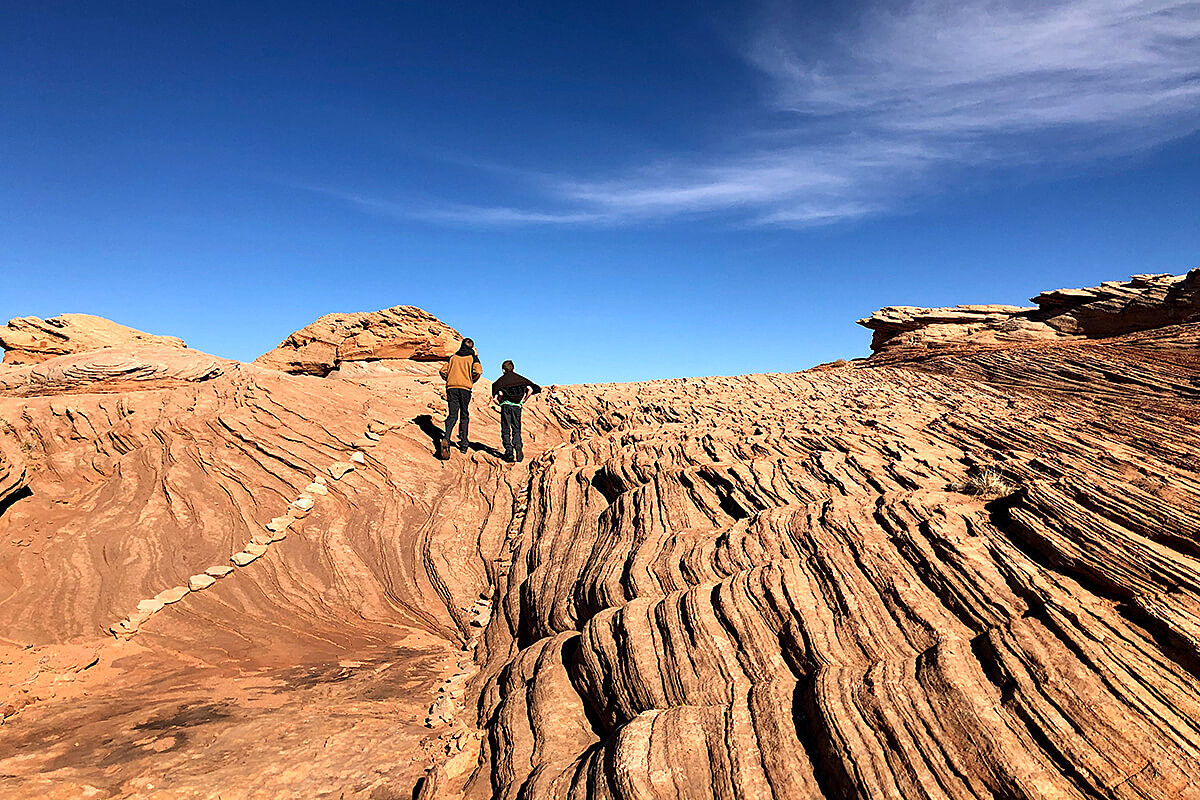 We have more to see in this area. We'll have to check out the other side of the Vermillion Cliffs. I know Max won't let us come through without stopping at the Bridge! And we would like to do a guided tour of the area when they're available again.